Last week’s post was about the challenge: Did the Bible live in you, today? This week, my challenge included making room for God when plans go awry. I could only face this test by living the Bible specifically standing on God’s promise, Exodus 14:4: “The Lord will fight for you; you only need be still.

At 6:30 a.m. on Thursday morning, I arrived at Westchester Airport for a 7:30 a.m. two-leg flight. At 7:00 a.m. my cellphone rang, the robotic voice said: Your flight has been delayed until 8:00 a.m. Fifteen minutes later the same number popped up on my cell, again flight scheduled for 8:30 a.m.

Immediately, I checked my itinerary for the departure of my connecting flight, 9:50 a.m. in Philadelphia. I shoved my book and trail mix in my knapsack and headed toward the US Airways counter.

I stood waiting, watching, praying and listening as the airline representatives begin rescheduling new flights for passengers. The lady behind me asked. “What’s the status?”

My cellphone rang again. The lady said, “The flight is delayed.”

I pressed the speaker button, turned to her and said. “This flight is cancelled.”

“Something is wrong,” I said. “Did you see the movie “Flight”?” I silently prayed. “Be still God is working this out. Don’t panic.”

The airline representatives rearranged passengers to different airports sixty miles south. The older gentleman in front of me looked distressed. His wife was disabled. The back and forth was not good for her knee.  The lady behind me, Jen, had spent her last dollar taxing to the airport because her friend stood her up.

“Ma’am, “ I said to the representative. “Is the plane here?”

“Yes and the crew, but it’s not leaving this airport. The hydraulic hose is the problem.” 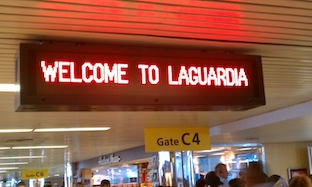 Thank you Lord for keeping me off that plane.

Then the rep told the older gentleman they would put him in a car and take he and his wife to LaGuardia airport for a straight flight.

“The Lord will fight for you, just be still,” I said.

Another woman said, “I don’t need a seat. I didn’t want to go on this trip anyway.”

I looked at the young man, “I’m not good enough for first class.” I was annoyed, but held my temper.

Then I said to the representative. “This young lady also needs a ride.” I pivoted to Jen standing behind me.

“Thanks for looking out,” she said.

However the representative snapped, “You want to give your seat to her.”

I bit my lip, “Be still,” I whispered to myself. “You’re right, I need to take care of me,” I said to the representative.

After my flight was rebooked, I realized my cousin had planned to meet me in Atlanta at 12:30 p.m. I sent him a text explaining I wouldn’t be in Atlanta until 5:22 p.m.; however I would sleep in a hotel and find my way in the morning.

My final destination was Alabama, a three-hour drive.

He texted back, “Let me see what I can do, I don’t want you staying in Atlanta.”

When I got in the town car, Jen followed. I offered her the front seat.

“God’s working on me; my patience and my politeness. I can be quite rude at times.” Let the Bible live in me was challenging.

One hour later, I walked into LaGuardia airport.  The line was long. “Hey,” a voice called. I was Jen. “Come stand here.”

Jen and I chatted, made our way to security and then to the same gate.

I bought a twenty-three ounce bottle of water, remembering her funds were low. For some reason Matthew 25:35b popped into my head” I was thirsty and you gave me something to drink, I was a stranger and you invited me.”

I got an extra cup. Returned to my seat and poured Jenny a cup.

Jen had a Bible. Jen carried the Bible for protection only. She stopped attending church, yet she believed in God. She didn’t read the Bible because she couldn’t understand the language. Nevertheless, she didn’t judge.

I explained that church is a place of fellowship, a place where we meet God and his people for worship. Then I suggested she read The Message version for more insight.

She looked puzzled. So, I stopped talking and offered her some trail mix.

I opened my magazine and read the following verse: Exodus 14:4: “The Lord will fight for you; you only need be still.”  I chuckled. God really does have a sense of humor. In another article the writer used The Message version of Psalm 47. I ripped out that section and handed it to Jen.

She read. She thanked me. She folded the torn sheet and tucked it in her pants pocket.

Minutes later we walked down the aisle of the aircraft: Zone 4 seat 34, me in C her in F. She said, “This really needs to be first class after all we’ve been through.”

Upon deplaning, we hugged each other in the airport lobby.

On my way to course B in Charlotte, my cousin texted me: We’ll be there thirty minute late.

I pulled my ticket out of my back pocket: Zone 1, Seat 4, First Class.

Reading the words twice, I hurried to the front of the line grateful I made room for God to do what He does, while I remained still.

Read Part 2: Making Room for God, From No Reservations to the Lakehouse Inn.

One thought on “Part 1: Making Room for God, From Zone 4 to First Class”